For more information on the Blaugust Initiative, you can click the link HERE and join in on the fun this month!

Past MMOs have marked me with a letter A in most games in the same vein to that of the Scarlet Letter. That A? It stands for altoholic. I can’t help it; I love to be able to switch bodies, try new classes, and toy with new outfits and projects on each respected toon.

In a game like FFXIV, they’ve really diminished that to a degree in that all the classes and crafts are readily accessible on one toon. So with that, I have a dedicated main. There’s just one problem though— cross server interaction is impossible to date. The likelihood that we’ll see it implemented in game? I’d honestly say those chances are slim to none.

*villainous laugh* MWHAHAHAHAHA I CAN STILL MAKE ALTS WITH JUST CAUSE.

So really Ali… why do you have alts? Well rather than tell you? Let me show you. 🙂 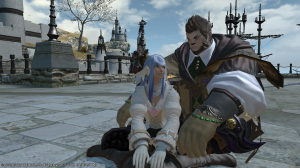 Esuna Yuuki has taken on many shapes and sizes, but always she’ll remain the Aqua Beserk Healer! ^_^

See that cute Lalafell and Miqo’te and Roegadyn? Those are some awesome dapper gentlemen. The Blogging community knows them best as Belghast from Tales of the Aggronaut and Murf from Murf Versus! They’re dedicated mains reside on Cactuar in the awesome FC, Greysky Armada. I had the pleasure of getting to know them both and the FC through that cute Miqo’te up there, StoppableForce on Twitter. Long before the birth of Pizzamaid, they along with the rest of the FC welcomed me and my Elezen> Lalafell > Au’Ra (I know… I Fantasia a lot) Esuna Yuuki a home on the server and tons of like minded folk to meet with and get to know better. I highly suggest for any folks looking for a new home to definitely check out Cactuar. I love Ultros with all my heart, but I can also attest to the fun times I’ve seen on Cactuar and tons of helpful people who reach out and aid all you sprouts!

*sniffles* Aw… those were the first screenshots me and Sam ever took! ❤

Then I jump over to the Faerie server, and it was there I met the Mister, Samo-chan. Both of us started playing XIV at the same time months and months prior, but we never really hung out with the exception of bantering back and forth on Twitter. When the humble beginnings of our relationship started, I made the conscious decision to roll my Roegadame, Vis Selenity, over there with his main to spend time with him and get to know him better. Both of us hoped something more would come out of it, but never in our wildest dreams did we expect it to bloom the way it did and then some! So of course while I carry out my duties and responsibilities in GoV on Rue, I get to swap over to Faerie for fun date nights with Sam. He even made an alt on Ultros so we could spend time on both of our servers for play dates and fun.

The moral of the story? Yeah— it’s not necessary to roll an alt in an all inclusive game like XIV. But! While cross server interaction is null at this point, there’s no harm in rolling an alt and making tons of new and fun memories with new friends from faraway places, or even the love of your life. Rue is for all intents and purposes my online persona, but both Vis Selenity and Esuna Yuuki serve their purposes as well as a significant other, and as a friend.