So while Blaugust held a predominant focus on the blog during August I was busy most evenings (every other Friday to be precise) where I had the afternoon into late evening to work on some other mini projects which coincide with the blog. One of them was streaming.

Since the inception of Twitch and FFXIV respectively I always had a genuine interest in watching other gamers play games that they really enjoyed showcasing and interacting with the fans who chose to take part in the stream as a viewer. Once XIV launched here I knew without a doubt I wanted my interests of the game and the medium to coexist in harmony. After numerous troubles with hardware, tweaking specs to give overall great content and finding a place to put them all once done? I finally have a good regimen in order and usually every other Fridays starting around June-ish I got my streaming platform up and running.

So now that the hectic hubbub of Summer is over and Fall is soon approaching I did something I had been wanting to do a few weeks back.

The overall consensus on my stream was that while “Rue is an adorable Miqo’te and watching you run dungeons and raids is fun and all, I want to see you start fresh and work your way up.” Fair enough viewers of the stream. I’ve listened to your feedback and am a woman of fulfilling dreams. So this past Friday to kick off the start of the Autumn streaming season, I decided I was going to bring in a new parlour maid. 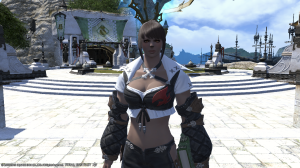 I promise you blog with all my heart and soul I fully intended to make Pizza Maid a Rogue > Ninja because daggers…. how else are we supposed to cut up pizza? Then I realized part way through leveling that I kept picking up out of habit nothing but INT/MND gear for her. Aww jingles… I SHOULD’VE PICKED UP THE DoW GEAR! A viewer on the stream then unintentionally added fuel to the fire saying “So you’re keeping her a magical girl, eh?” You found the two words that are my utter weakness…. Magical Girl.

I’m going to level her up as a summoner though. I already do enough healing on Rue as it is. I WILL DPS AND I WILL BE GLORIOUS IN BATTLE DURING FRONTLINES WITH IFRIT BY MY SIDE.

So for about 3-4 hours every other Friday? The viewers will aid me in bringing up Pizza Maid as a proper Warrior of Light. I wasn’t sure initially how folks would react to her, but I was surprised to see folks from the UK and Canada jump on into the stream and enjoy her and really gave her a personality of her own. One even made a song about her!

Perhaps I’ll add a tab to the blog with an embedded window of the stream when it goes live, but in the meantime here’s to a new maid in the crew!

One thought on “Introducing This Fall’s Newest Sweetheart”