Happy November to you all!

After having a relaxing and amazing Halloween weekend with my Tuxedo Mask here in NYC I’m refreshed, rejuvenated and ready to kick tush and take names!

Initially I was unsure what I wanted to tackle in today’s blog post, but as fate would decide someone was kind enough to give me something to discuss.

First off Chestnut? Thank you!!!! ^_^ I normally find my screenshots to be dull and normally dark given the environment I’m in, but I appreciate your kind words and would be glad to assist!

In all honesty my guide to XIV screenshots isn’t an in-depth guide of any sorts mainly because I operate predominantly on my MacBook Pro 13″ with a PC Bootcamp partition for Windows. I normally just take the screenshots I take on my laptop, upload them to my Flickr account and then have them there for safe keeping and can clear up space on my Bootcamp partition. I will say this though; I TAKE A LOT OF SCREENSHOTS. It’s kind of ridiculous. Enough of the babble though and let’s get into the nitty gritty, shall we?

A lot of folks keep specific key binds for their images. Again being a laptop user I’m predominantly mobile in game with the use of my mouse so for what would normally be used for strafing movements? I actually use those for my images.

Q – This is my “Take Screenshot” key. As a lefty, it’s just comfortable to me to key bind to my left, and I know for myself I’m rarely writing many words that start with or use the letter Q. Hence that’s that.

W – This is my “Toggle UI” key bind. To keep things uniform and close together I just keep the button there.

E – Now this? This is a crucial key bind. This is my “Face Camera” key bind. With regards to screenshots, this key bind is mutually exclusive with the take screenshot key bind so I can position my model’s head and figure out how close or how far to the target’s image I want to be.

R – This is my “Toggle Run/Walk” key bind. When taking action screenshots on a mount or in general I keep this one relatively close to the key binds for easy access.

T – There—- there’s a key bind and a purpose for this, but honestly? For the life of me off the top of my head I can’t remember it right now. I’ll probably edit this post later tonight to reflect and update. I promise! 🙂

Mouse Scroll ^ or v – This is your run-of-the-mill zoom in and zoom out. I have a click scroll on my old Logitech mouse so if you have one, it’ll be of great use. If not? In the System or Movement tab of the Keybind Configuration in game you should have the option available to bind any two buttons to zooming in and zooming out. 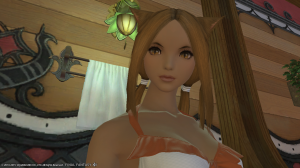 I know some MMOs have implemented selfie shots of their own into their respected game, but in XIV that’s not in there. As visually aesthetic as the game is though, it’s easily possible to create the selfie image in game.

With this specific reference above for Rue, I actually have her seated in her hot tub in her private estate. In the default /sit pose I actually scrolled and zoomed in as close as possible and proceeded to move around the mouse until I was close enough to her face without clipping or cutting into the pixels on her face. This can also be obtained if you place your character into the direction of a wall and pressing V as well. Then with my E button I can pose Rue’s face in my general direction for the shot.

Another fun one that’s super simple to do this one mainly involves you choosing two focuses: your model, and an open world environment (In this instance I was in the Dravanian Forelands just flying around in the air looking for a Spoopy area). While I had Rue on auto-walk while mounted on her broom I just used the mouse to find a good balance with enough of Rue in the picture and enough of a second focus for the shot (The second focus was the building to the right). This could take a few tries / flies / runs around to get the shot you want, or in some instances you get a shot you never expected and turned out with an even better image. I really encourage with action shots in particular to just keep snapping that Q and then reviewing the screen grabs you got in your folder so you have some reference if you want to go farther from the second target image or move closer. 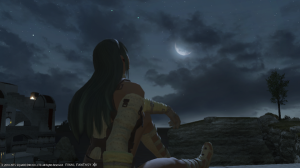 I guess if there were levels of complexity this might be the toughest one to grab, but believe me when I say once you get the hang of it? You’re golden. This one involves your model, your environment, angles, and depth of perception via zoom-in and out. With this specific one that I took on my alt, Pizza Maid, I was in Moraby Drydocks and had her seated on the edge of the stone wall. As coincidence would have it I managed to just catch the start of dusk on the server so the moon was still hanging heavy in the sky. I had her seated in her default Elezen pose and then had to tinker with the angle in which it would give the impression that she was looking at the moon. For this I did a far zoom out and angled the camera to where I thought the position of the moon was and then clicked E so she was facing it. Then I would zoom back into her and angled the shot so her head would be tilted towards the general direction of the moon. This is going to take a few tries until you get the shot that you want, but fear not. In game the night and day cycles aren’t very fast so you can complete the shot you want in 4-5 tries easily. It gives her the impression of a far away, dreamy pose which intentionally I was aiming for. Couple that with the clouds lightly shrouded around the moon, the sun near being fully set and the stars starting to appear in the sky made this shot a personal favorite of mine.

In closing, these are just some of the tricks I use to creating some fun screenshots thatI’ve used for nearly all my XIV screenshots (some of which have turned into my own desktops, banners, etc.). I should’ve prefaced this first but for those curious, my graphics settings are actually set to the Standard Laptop setting just because I don’t want my laptop to overheat while running. I’m sure at max graphic settings these could be even more beautiful, but for me? They work just fine. Maybe one day I’ll have the means to purchase a photo editing program like Photoshop to add filters and what not, but these are purely 100% filter free. They’re as I grab them in game. Some additional tips and tricks to be mindful of when taking a screenshot:

In conjunction with this screenshot guide, I also wanted to take a second to promote a really fun event that goes hand-in-hand with this guide. From the same lady that inquired about my screenshot guide, the lovely Chestnut from Gamer Girl Confessions also has a month long event happening RIGHT NOW called International Picture Posting Month (#IntPiPoMo for short). Be sure to click this link to get all the full details on the event and showcase your lovely images to the Internets as well!

One thought on “The Pizza Maid Guide to FFXIV Screenshots”