I think one of the things I enjoy most about gaming is that it’s a medium that can attract all walks of life as well as all ages too. In our gaming household, the bulk of it is FPS games, competitive style fighting games, MMO games (woot woot!), rhythm games in the vein of Rock Band and Guitar Hero, and then your run of the mill family board games made playable on the major consoles.

And then? There’s my nephew who is the youngest cub of this clan. He’s five years old and does a whole lot of watching video games, until recently. His Mom purchased him a Wii so that we as a family could partake in some games with him including, but not limited to the Wii Sports games, Sega Olympics, the Lego Superheroes franchise, and just recently? Skylanders.

I’m foreign to a lot of console gaming releases since I don’t play the consoles all that much, but the nephew was really excited to show me this game this past Sunday when me and him had planned for a whole day together hanging out. So much to my surprise I grabbed my Wii remote and nunchuck and we got to playing.

Now I’m not entirely sure, but I think this may be one of the few Skylanders games where co-op mode is available. So he placed his level 12 Skylander, Chop Chop, on the Skylander gaming portal (which by the way was cute as a button when he was explaining it to me) and then he showed me his current (and growing collection) of Skylanders for me to try. 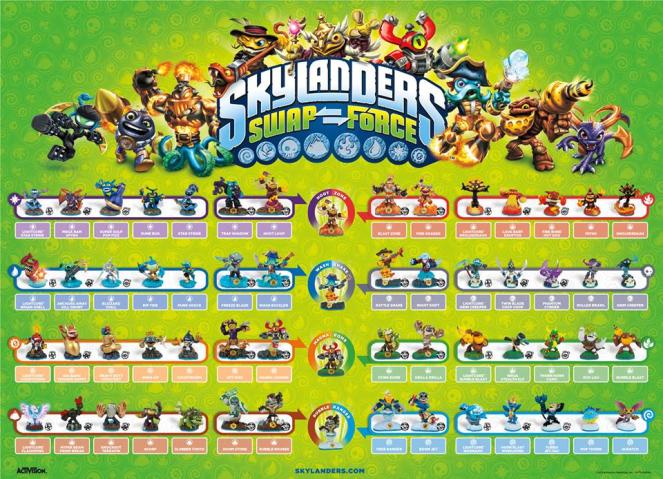 I’m going to be honest, I like and appreciate all the Amiibo, Disney Infinity and Skylanders figures, but I know little to nothing about them. It’s a really cool concept! … Is my age showing? Haha. So with each respected Skylander is based on a respected element, my nephew suggested I try out a water based Skylander; preferably one that’s a ranged fighter. So I gave Punk Shock a shot.

The game was so much fun and two hours later, minor arguments over winged sapphires and coins later? My nephew and I found a little game night that we can play on the wekends. Now provided he’s behaving well in school and at home with Mom I told him we could play for two hours max on the weekends. He even got excited and asked if I’d pick up a Skylander of my own. His excitement and smile was so infectious, I couldn’t help but get excited when choosing a Skylander of my very own too! After he showed me the site online and we looked at all the available Skylanders, I fell in love with the cosmic Skylander, Star Strike.

Kaos poured through every dusty scroll and ancient tome he could find. Upon stumbling across a rare and extremely powerful spell, he began to recite its words. However, he sneezed midway through the incantation. As a result, instead of sending the Skylanders far away, Star Strike was plucked from her home in the distant cosmos and brought into Skylands. Surprised, Kaos thought he’d won a powerful new ally in the mysterious and reserved Star Strike. But she knew evil when she saw it and promptly unleashed her fierce magical powers on him. Word of her victory over Kaos spread quickly and she was soon asked by Master Eon to join the Skylanders.

You can also see more of Star Strike’s gameplay in the video below. I’ll let you know how our first game night goes!