In this month long series, I wanted to introduce readers old and new a little more into the life of Pizzamaid.moe’s Muse and Mascot, Alisha Rue. I encourage any folks from all walks of life and games to join me if you’re looking for a creative outlet into writing, and developing your OC a little more, regardless of game or genre. Be sure to hashtag your posts on your respected site / blog / Tumblr / Twitter with #30DaysofARPil and let me know here in the comments below or on Twitter at @Pizzamaid !

Also know that the questions compiled for this series was originally posted by Oslusiadas of Tumblr. I’d like to properly credit them for posting this. 🙂

p.s. Those are actually FC mates, but truly a happily married couple in real life! Thanks Dustman and Subzillah Titansock! ❤ 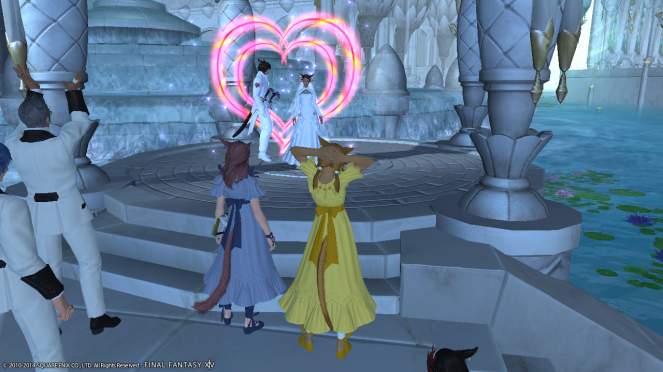 It was a wee bit before my coming of age, but probably one of the biggest (and most joyous) events to happen for my family and a fond memory in my mind was the Eternal Bond ceremony of my oldest sister, M’rhabye, to her lifemate, D’tsunhe Tia.

My sister (whom I normally call Rabi) is a very smart Seeker who chose the path of being an Arcanist and has devoted her life to the study of the Nymian civilization. We always had this vision in our mind that she would unite with another like-minded Scholar or Summoner, but along came D’tsunhe. Now D’tsunhe is a very skilled machinist with a love for never missing the bullseye and a penchant for engineering and building mechanisms. An odd pairing at first glance perhaps, but following their first meeting and ever since that fateful day they’ve remained inseparable and it’s clear to the Hyur eye that both Thaliak and Byregot themselves created them specifically for the other. When it was announced to the clan that they would bond? Well— that alone was enough reason for a celebration!

In the months following their engagement everyone in our village lent a helping hand and contributed to both the upcoming ceremony and their reception as this was one of the bigger events that happened in our little slice of the Sagolii Desert in some time. And when the day came? OHHH WEEE. You would’ve thought Azeyma herself was making a red carpet appearance to our village! On the trek from Thanalan all the way to East Shroud for the ceremony dancers were doing flips and cartwheels down the road, music was playing, villagers were singing, and the entire time Rabi was reading a book! On the other hand, D’tsunhe was partaking in some yummy swill wine and singing along while longingly gazing at his mate-to-be.

The ceremony itself was easily one of the most beautiful moments I can ever recall witnessing. My sister in her gown, committing herself unconditionally to D’tsunhe. And D’tsunhe? In all of his bulk and rugged edge was a complete woman just sobbing and crying so many happy tears just hearing my sister vow to be his until eternity. Me and my mother couldn’t help but stifle a little giggle, but we knew with those tears came a solidarity of promise and a lifetime of love. Then the reception? TOTAL DANCE PARTY.

I think aside from the ceremonies itself, what I remember most about that day were the laughs, the cheers, friends and family choking back happy tears, and all the hugs and kisses that followed the union. For a fleeting moment, the Calamity and the devastation that affected us all didn’t exist. Love, laughter, happiness (and I mean true happiness) resonated through our minds and hearts. And for one day, one day I truly felt inner peace. 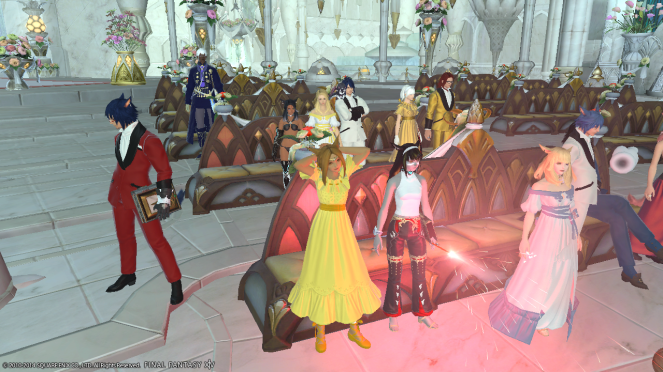